Top 4 Unique Things To Do In Sarajevo

Blog Balkans Top 4 Unique Things To Do In Sarajevo 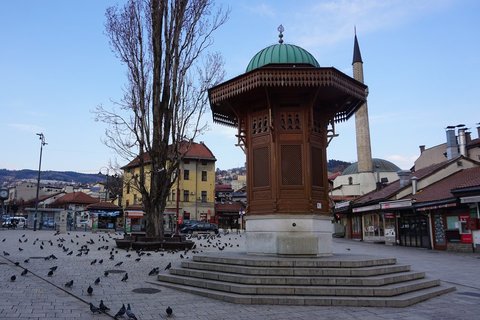 Whenever you travel, especially to some new country, you always want to experience something new, something unique. But finding hidden gems in every city isn’t very easy. Some gems are hidden in plain sight, but you never know. So, I gathered some interesting and cool things you can do in Sarajevo. Besides taking some of the best Sarajevo tours here are 7 unique things you can do!

Feed The Pigeons in Sarajevo

The main square in the city of Sarajevo often called The Pigeon Square (only by tourists, the real name of the square is Baščaršija), is a home of hundreds of pigeons. It’s a huge attraction to see so many pigeons at the heart of the city. The mesmerizing sight of hundreds of them flying in the sky in a split second is absolutely worth it. If you are a good photographer you can definitely catch them and make that moment eternal. But even after that, your adventure doesn’t have to end. For a small price, you can buy food for them from the locals that sell it there, so you can personally feed them

Sarajevo Meeting of Cultures is very peculiar and amusing thing to see. It’s a must stop on all Sarajevo Walking tours, but in care you are wandering around the city by yourself, you might miss this spot. Meeting of Cultures is a special message you can find in Ferhadija st. This spot is very thought-provoking and compelling, place where two dominant cultures meet and clash. From one side you can find yourself in Istanbul, the heart of Ottoman Empire. Everything around you breaths and reminds you of Islam and Ottoman Empire. But…Only one step ahead and you will be captivated by utterly other look. This isn’t Istanbul anymore, but rather you are in the Vienna, in Austria. Buildings are different, architecture, and some people say even mentality of people is entirely different. Only one step! From Ottoman Empire to Austro-Hungarian Empire. These two empires shaped this city and it’s looks. In case you are passing through this area (and you  certainly will) make sure you stop here. Another interesting and amusing fact about this spot is, from the centre of the line, in a square of 100m you can find 4 different religious monuments: Old Orthodox Church, Mosque, Jewish Temple and Catholic Cathedral.No where else in the world you can possibly find that many religious objects in such a small place. This is one of the reasons why Sarajevo is nicknamed “European Jerusalem”.

Check Out Stećci at the National Museum of Bosnia and Herzegovina

While reading this header your first thought would probably be “What is Stećak/Stećci?????” First I will tell you why the word can be written differently. Stećak is a singular word while Stećci is plural word. What are they? They are medieval tombstones. Before Ottoman period, Bosnia had it’s own Kingdom, so naturally we will have medieval tombstones. There are 60 000 of them in the entire Bosnia and Herzegovina, but you can also find smaller number of them in Croatia, Serbia and Montenegro. So if you can find it in 3 more countries why are they so unique? Answer to that is simple. Borders that Bosnia has today were quite different during the medieval period. Bosnia was at peak of it’s power while Tvrtko I Kotromanić was the King and of course he conquered many parts of today’s Croatia, Montenegro and Serbia. Naturally remains of culture can be found there. Where can you find these tombstones in Sarajevo? You can find them at the National Museum. The National Museum holds many treasures and one part of this huge collection are Stećci.

After 26 years this Cable car is once again, fully functional. Why is it so unique? This cable car was quite popular before the siege of Sarajevo, and when it was destroyed, part of the city soul was destroyed with it. You can only imagine how locals were happy to find out that Cable car will once again become lively place with many local and foreign people. Every car cabin is equipped with cameras and all of them are pet friendly. As for a price, the cost of a one way ticket for tourists is 15 KM, and return ticket costs 20KM. In case you have a bike with you, you will be charged 4KM extra. While at the top of mountain Trebević you can walk around and enjoy the clean air and beautiful panoramic point of view. You can also walk around the Olympic bobsled track.