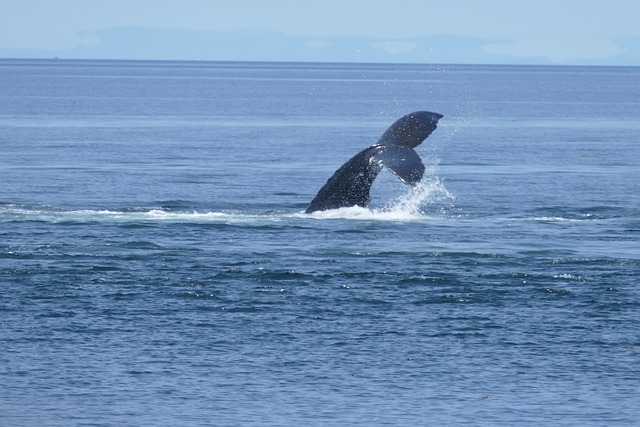 Researchers from the Croatian Museum of Natural History and the Blue World Institute reported on Monday that they had filmed another large fin whale at the Adriatic Sea, in the Velebit Channel, saying that this “successfully concluded almost three weeks of monitoring the stay of fin whales in the Velebit Channel”.

The whale was observed by the researchers, who followed it on the boat and by a drone on Saturday and Sunday. On reviewing the photos, they determined that it was not the same whale that was in this area in mid-August.

“Apart from the fact that his dives lasted shorter [on Sunday], this time the big fin whale was interested in our vessel. On several occasions, he swam along with our ship only 4 to 5 meters below the surface,” Grgur Pleslic, director of the scientific program of the Blue World Institute, said.

Another researcher, Drasko Holcer, senior curator at the Croatian Museum of Natural History, performed a biopsy of the skin of the whale.

“Such a situation is advantageous for taking a biopsy because it allows you to hit the animal accurately without risking possible injury or failure,” Holcer said, noting that this was probably the first ever successful biopsy of a fin whale in the Adriatic.

Researchers said they hope that the data will help determine from which part of the Mediterranean the great whales come to the Adriatic.

The Blue World Institute of Marine Research and Conservation says the fin whale is a widely distributed species found throughout the major oceans, particularly in cool temperate and polar latitudes, but they also inhabit the Mediterranean and sometimes visit the Adriatic.

In the Mediterranean, they are listed as endangered species. The second largest mammal on earth, they are exceeded in size only by the blue whale. Females can grow up to 27 meters long and weigh nearly 100 tons.

The footage of the Croatian researchers shows the fin whale swimming slowly alongside the vessel. “To get an impression of the size [of the whale], we will say the boat is about seven meters long!,” the researchers noted.